Within Southwest Portland’s boundaries you will find downtown, Providence Park, Portland State University and variety of unique and breathtaking neighborhoods. We’ll highlight some of the living options, from the elegant homes of the Southwest Hills, urban living along the Willamette River at South Waterfront, to the charming communities of Hillsdale and Multnomah. 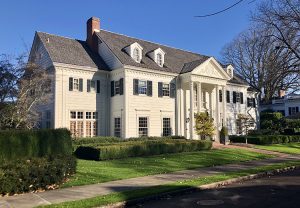 If you’re looking to escape from the bustle of downtown for well manicured neighborhoods with character, stately homes and great schools – look no further than the Southwest Hills.  Including Portland Heights, Council Crest and Arlington Heights.  With incredible views and close proximity to downtown Portland the Southwest Hills have long been the preferred destination for affluent residents.

You’ll find bucolic scenery and historic estates nestled among steep green hills and winding streets. The majority of homes here were built in the early part of the 20th century and range from Colonial, English Cottages, Tudors, Craftsman and mid-century modern.

Living in an upscale neighborhood less than 10 minutes drive to downtown’s amenities is a rare find in major metropolitan cities. Pop out to shop in the Pearl District, eat at Luc Lac Vietnamese Kitchen, or watch the orchestra at Arlene Schnitzer Concert Hall a short distance from home.

These neighborhoods also offer some of the most visited outdoor destinations in Portland. Top picks include the International Rose Test Garden, Portland Japanese Garden, Washington Park with miles of trails and Council Crest Park, the highest point in Portland (over 1,000 feet above sea level)  with a 180-degree views. 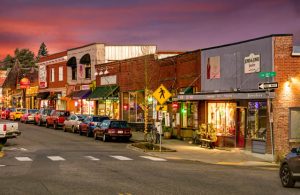 Located on the west side of the southwest hills are the neighborhoods of Hillsdale and Multnomah. A close-in suburban setting, within minutes of Portland’s urban center, Hillsdale is a small enclave with many homes catching views over the Tualatin Valley. You’ll find shops, restaurants, coffee houses, and Sasquatch Brewing at the neighborhood’s center. Home to a year-round Farmer’s Market and plenty of parks to please even the most ardent outdoor enthusiast. Explore the 35-acre George Himes City Park or the 103-acre biking and hiking trails of Southwest Terwilliger Boulevard Park. Hillsdale is a great option if you’re looking for a small community feel, nestled into the hills within a short distance to downtown Portland.

Multnomah, or Mulnomah Village, backs to Hillsdale and features several historical buildings.  Developed around the Oregon Electric Railway depot in the early 1900s, the Village gives a charming vibe with storefronts rooted in a different era. There’s a satisfying mix of neighborhood stores, like Annie Bloom’s Books, cafes and wine bars.  The mix makes the village something of a local secret. The 90 acre Gabriel Park and quaint 6.4 acre Custer Park offer room to run and get the dogs and family out. Multnomah offers a diversity of housing types and styles, from classic single level ranch to contemporary new builds. 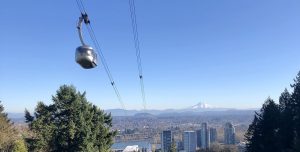 Portland’s South Waterfront located on the west bank of the Willamette River is an urban renewal, high-rise district offering breathtaking views with mixed use amenities. Sustainable and environmental attributes were heavily utilized in the planning and development of this neighborhood. Here resides the most LEED residential towers of any neighborhood in the country. Along with energy efficient housing the area offers direct access to paths along the river, retail shops, restaurants and parks. The dog park is also a central focus in this canine-friendly community as is the South Waterfront Farmer’s Market at Elizabeth Caruthers’ Park. Tilikum Crossing, the newest bridge in Portland completed in 2015, serves only bicyclists, pedestrians and MAX light rail across the Willamette River.

Many residents of the neighborhood work or study at Oregon Health & Science University (OHSU), Portland’s largest employer. Several OHSU campus buildings are located at the South Waterfront. Catch the arial tram up to the OHSU Marquam Hill campus for the best views in town.

Interesting in exploring homes in Southwest Portland?
Search the listing below: